1. Hey, can you please introduce yourself?

My name is Joe Barbour and I’m a self-taught, fully remote, 28-year-old, recently engaged CTO (of Knoma.io) from Lancaster, England. And I am a travel-holic! It feels like a weight has been lifted finally admitting to that.

My story starts at an early age (obviously). I always loved computers and was luckily born in the early ’90s. So once I started hitting my teenage years computers were finally much smaller and more affordable. I loved playing video games, but I wanted to make my own. Knowing nothing about programming, or really anything about computers I turned to dialup internet. As you can imagine it was a slow journey with lots of misdirection and mistakes, but nevertheless a compelling and fun one!

Speed up to several years later and I released my first app on the AppStore. This was not a game like I planned, it was a crappy soundboard. But it was a start, and it was something people liked as it was downloaded 10k times in one week… until I got a cease and desist letter telling me to pull it for breaching copyright 🧐

It was then that I realised I was on to something! Messing with computers no longer was a hobby that my parents snuffed at. It was my career path. Since then I have worked for companies big and small, working usually as iOS developer, or in later years head of mobile for a few interesting companies. I also released my own apps, one even got featured by Apple and was 5th in the productivity charts for a few weeks.

I moved to London when I was 18 to study Film and TV Production. I hated it and dropped out of early on. It turns out all teachers/ lecturers are all people that couldn’t actually get a job in the movie industry, so instead they attempt to teach it. So, bit of advice kids, don’t go to school to study film. That’s what the internet is for.

I did however stay back in London as it is the home of exciting new startups for most of Europe and for the most part I loved it. It was there I tried my hand at remote work, sometimes permanently, sometime just a few days a week.

As the years went on, the weather, cost of living and the intensity of a city like London began to grind on me. I figured it was time for a change, at least for a short while. So I moved out of my flat, put my stuff in storage and signed up to travel with the idea to do a 6-month tour of Asia with the remote travel group Hacker Paradise, and take my remote work experience to a whole new level!

Long story short, I never came back to London and 30 countries and 100+ flights later I am still travelling the world. Only now, I do it with my fiance Michelle, and not with a rag-tag group of digital nomads. And instead of working for clients, I get to work as CTO for one of the hottest fintech companies in London. Surely, a dream job, as I doubt there are many fully remote CTOs that get to travel the world. 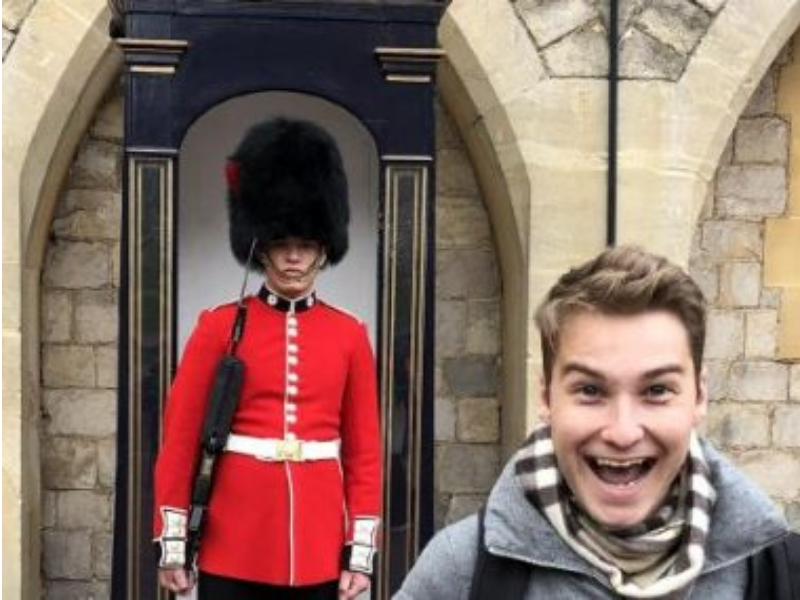 2. What motivated you to choose remote working?

Much like my unconventional way of learning, so was the way I worked. I prefer to work at night, or early in the mornings, so the 9-5 was something that never really worked for me. Naturally working remotely was a good fit as I got to work the hours I wanted and because of it, my work was better.

Not to mention I liked my own space and I liked to be able to take breaks when I needed them, rather than a forced ‘lunch hour’. I also found when I was on a roll I could stay as late as I wanted without distractions (often working into the early hours). And when I wasn’t, I could take some time to my self without the stigma of being lazy.

3. What were your initial months like? Did it live up to your expectations?

It was a long time ago so I can’t recall too well. So instead, I will begin from the time I started travelling as that was a whole new ballgame.

I moved to Danang, Vietnam at the end of February 2018. Overnight, everything changed. I was now surrounded by an exciting new group of friends. A new place to live and work from. Not to mention I had a new climate, timezone, culture and city to get used too. Pretty much everything was new. For that reason, it took me some time to figure things out.

Luckily, at the time I was working for a client who was very relaxed with deadlines, often too relaxed. Working for that particular client had its pitfalls, but deadlines for this project worked in my favour, while I figured things out.

So a piece of advice for people who are going to make the transition, make sure to give yourself some time to adapt. And know you are going to get less work done than you usually do, that is until you find your rhythm.

4. How did you find remote working roles?

While in London I used sites like Angellist. This allowed me to find new and hungry startups where working remotely wasn’t an issue. But they were also established enough to pay the bills. Later on, it was word-of-mouth and networking. Word-of-mouth is something that comes over a long period and is not something you can get when you are just starting out.

5. What have been the best, good and worst aspects of remote working for you?

Day-to-day, one of the things I love about remote work is when I face a problem, whether it be a coding issue or bigger picture stuff, I can get up from my desk, close my laptop and go elsewhere. Sometimes I go for a run, go to the shop, sometimes it’s just for a shower. Currently, with quarantine life, it’s usually the latter.

But when I come back I almost always have a solution, or at least am heading towards one. I think that is because your company office is not your own space. Most people need their own space to think and process information outside of work, so it makes sense this process works at work too.

The worst part of being remote, especially been on another timezone, (currently 6 hours behind) is not been able to socialise with the team outside of work. Some of them I work with every day and speak with often more than my fiance, but I have yet to actually meet them.

6. What tools do you swear by while working remotely?

With many of my first client jobs, emails did the trick as many were small companies with no technical experience. But at Knoma we use a bunch of tools to align various teams spread between the London office, some of our developers in India and other staff like me who work remotely.

The most important is obviously Slack! Slack is not only where we all communicate daily, but it’s where we have a ton of integrations with JIRA, GitHub and Geekbot. We have also created integrations to monitor issues and create reports that are related to development.

Outside of Slack, JIRA is super important as is Confluence for documenting and managing the thousands of tasks right across the company. We use Dashlane to share passwords securely (never send passwords over messager services or email), PAW to share and sync updated API endpoints and Lingo to sync assets.

I have also started using Sunsama, which is a great management tool that syncs with Github, your work calendar and JIRA (and more) so you can pull issues, tasks and more from where ever you have them and sort them into to-do for the week. This tool is very new and has a few bugs, but it’s better than anything I have used before and has increased my productivity.

7. Your most exciting/ hilarious experience since you started working remotely.

I spent 8 years mostly working from dark rooms in London for really long hours. My weekend was filled, if not working, then probably doing chores or going to the cinema. Now I get to travel the world, so my weekends are usually full of things most people wouldn’t be able to do with just 2 days off.

Over the past 2 years, I have been fortunate enough to do the following things at the weekend or with my days off:

- Visit the de-militarized zone between North & South Korea
- Be a part of a Diwali ceremony in India
- Ride a dune buggy in the desert of Peru
- Attend big sweaty bloc parties during Rio Carnival
- Witness mariachi band play while drinking tequila in Mexico
- Go around the world in Epcot Disney World
- Design my own shoes in Vietnam
- Feed big beautiful elephants in an ethical sanctuary in Thailand
- Climb the mountains between Italy & Switzerland
- Go Scubadiving in Cyprus
- And of course, get engaged on the high seas


8. What is your golden advice to a new remote worker?

Remote.tools published some stats recently that found that over 40% of remote workers work more hours than they should.

So my advice to most people is to remember to take breaks and listen to your body and have days off! Working long hours means you may get more done, but at what cost? I have had many burnouts over the years because I simply didn’t listen to my body. A burnout will set you back much further than finishing an hour earlier each day.

Also, on a somewhat related note, dark rooms/offices should be avoided. Natural light is your friend. Darkness will have a negative effect on your mood which results in poor productivity. Again, speaking for experience here.

9. How do you see your career shaping up and your goals?

Knoma is still a small yet very scrappy team. Now we have gone live and expect this to grow. So I will need to step up my game! I will have to learn lots of skills, and not just in the realms of development but in management, recruitment and much more.

As I am the CTO of a learning platform, I have the all-new Knoma Marketplace filled with amazing online courses at my disposal to help me build on these new skills I will require.

10. How do you expect remote working to evolve in the future?

New technology & tools that allow remote teams to work more productively are being released all the time and websites like ProductHunt are great for finding them.

But I think what does need to change is the attitude towards remote workers, especially in much larger companies. I am fortunate that Knoma allows me to work remotely.

With COVID-19 plaguing the planet at the time of writing this, people have been forced to adapt to remote work situations – some are better prepared than others. Once all this blows over (hopefully very soon), I hope that many more companies will put more long-term procedural changes in place. This will help companies and employees alike be better equipped to deal with something like this in the future.

I try to avoid social media as it’s usually a wormhole of toxicity, so don't have any links to share here.